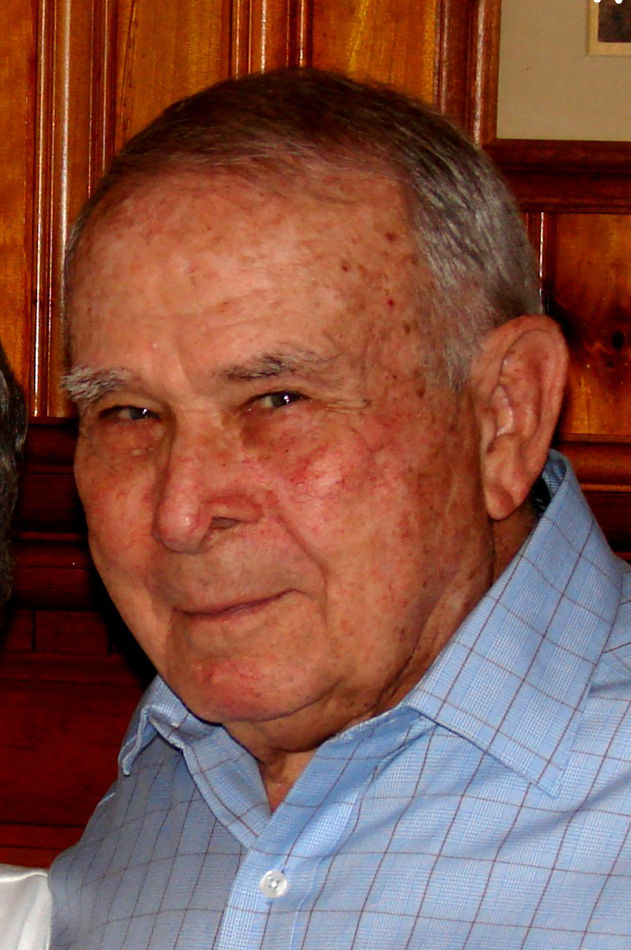 Wilton Burton Wheeley was born to Roy John and Estelle Talley Wheeley on February 10, 1925, in Burlington, North Carolina. After graduating from Burlington High School, at the age of 18, Wilton enlisted in the US Navy in February 1943. He boarded the new destroyer Escort USS Stanton and remained on this ship till the end of WWII. During his tour, Wilton ranked as F2C-Fireman 2nd Class on the east coast then continued his tour in the Pacific, ranking E, Electrician 1st class Petty Officer. He completed his tour in the Pacific serving in the ship’s engine room till the end of WWII. He later enlisted in the Naval reserves from August 1947 till 1951.

On November 16, 1947, Wilton married Mary Evelyn Shoe of Burlington. They moved to Durham where they started their family; daughter, Lynn Wheeley Loomis (Bill) of Raleigh and son, Edward Wheeley of Hurdle Mills, NC. Wilton and his business partner, C.E. VonCanon (Bud) opened Central Electric Moto Co. which stayed in business for over 40 years.

He was a man of natural ability and a keen observer, as well as a good judge of men. He was endowed by nature with a strong constitution which enabled him to hold onto life a longer period of time than would have been possible for most. He believed that family came first. He had a strong faith in God and love for his country.

Wilton was a 60-year member of the Masons, Lodge 687 and received awards in 2015 for his service. Wilton found pleasure in participating in horse shows with his Paso Fino horses that he owned for a good portion of his adult life. He enjoyed the fellowship with  his golfing buddies who have passed as well. Over 50 years, Wilton filled numerous capacities in his Methodist church that meant so much to him, including Cub Scout Master. Alongside his church friends, Wilton spent 14 years cooking and serving BBQ chicken meals to the RTP area of Durham. This ongoing project paid for the beautiful sanctuary. He loved playing his 4-string Gibson Banjo with the Jack Wardlaw Banjo group entertaining nursing home residents and political events. He became proficient in playing Ragtime tunes. Wilton found joy in holding annual BBQs for friends and family for over 30 years as well as holding the Wheeley family reunions at his home.

Due to kidney failure, Wilton spent his last weeks at his home, with many visits and support from his children and grandchildren showing their love for him. He will be missed by family and friends alike.

On behalf of Wilton, his children want to thank his VA doctor, David Edelman in Durham, and his Urologist, Dr. Robert Reagan in Clinton, NC, for many years of care and friendship. Thanks also goes to his recent Caregivers, Tonya Alston and Roslyn Harding; and to Heartland Hospice for their care.

The Reverend Lynn Lingafelt of First Baptist, Salisbury St. of Raleigh, will conduct a graveside service at Brier Creek Memorial Gardens to his memory on Friday, April 23, 2021 at 2:00 p.m. , after which his and Evelyn’s ashes will be placed side-by-side at the grave site. Visitation will be held following the service at the Wheeley home.

In lieu of flowers, donations to St. Jude at 501 St. Jude Place, Memphis, TN 38105,  or the Shriners’ Hospital at www.shrinershospitalsforchildren.org, would be appreciated.

To order memorial trees or send flowers to the family in memory of Wilton Burton Wheeley, please visit our flower store.