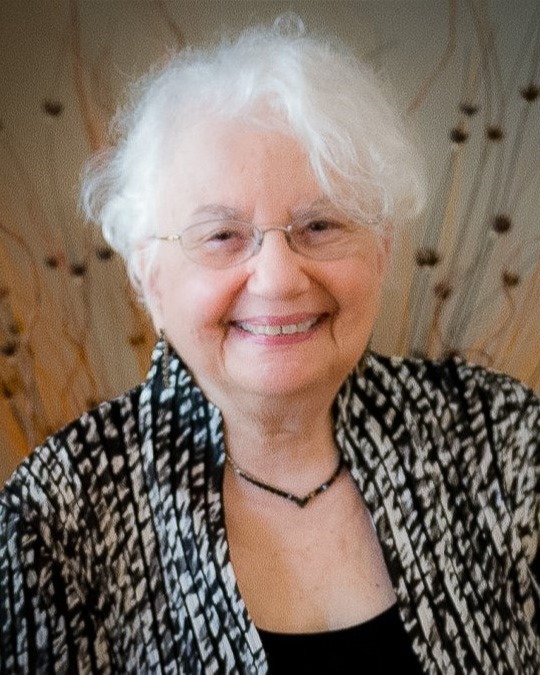 Sarah Rebecca Kornblau Kittner passed away on December 12, 2022. She lived 94+ years, present and curious, learning and relating, and endlessly devoted to her family, friends and community.

Sarah was born in Richmond, Virginia, on May 13, 1928, the youngest child of Louis and Berta Kornblau. Louis and Berta had immigrated from Zborov, Tarnapol region (now part of Ukraine), seven years earlier and settled in Richmond to join other family members, all working to build their version of the American dream. Sarah, or “Shiny” (a Southern version of the Yiddish name, “Shaina,” meaning beautiful), as she was fondly called by her family, was very much a part of her parent’s dream, living the life of an allAmerican girl while being lovingly enveloped by her Yiddish speaking parents, tantas, uncles and cousins. Sarah attended public school and graduated from John Marshall High School in 1945, and then completed a two-year business course at the Richmond Professional Institute, later a part of Virginia Commonwealth University. Even with the difficult eras of the Great Depression and World War II as the backdrop of her childhood and teenage years, Sarah always spoke of growing up in Richmond with great affection.

At a chance meeting under the Thalhimers’ clock, a popular Richmond meeting place, a friend asked Sarah if she was free that coming weekend to go on a blind date with her husband’s best friend who was coming from out of town for a visit. The best friend, Harry Kittner, had returned from his wartime service in the Pacific and recently joined his family clothing business in Weldon, N.C. Suffice to say, Sarah went on the date, and it was a match! Sarah and Harry soon married and settled in Weldon. Sarah began a new chapter, transitioning from city girl to small-town wife and mother.

Harry and Sarah spent the following decades engaged in community life and raising their four children. The couple was involved in many civic and cultural activities in the Weldon/Roanoke Rapids area. They were active members of the closeknit congregation of Temple Emanu-El in Weldon.

As parents, Sarah and Harry were open-minded and steadfast, providing a loving, stable home for their children. Sarah encouraged independence and creativity, and was an excellent role model, returning to college to complete a bachelor’s degree from North Carolina Wesleyan College in 1978. She became public information officer for Halifax Community College, and later served on its board, including as its chairperson. She was a staunch believer in the value of education and a strong advocate for the community college system. Sarah and Harry raised funds for scholarships to assist residents of Halifax and Northampton Counties in achieving their educational goals.

In 1998, Sarah and Harry retired and moved to Chapel Hill. Sarah immersed herself in the arts and cultural offerings of UNC and the Triangle, and they joined the newly formed Kehillah Synagogue. They were instrumental in the establishment of Chapel Emanu-El, an intimate and treasured worship space within the synagogue dedicated to the memory and spirit of their former congregation in Weldon, which had closed during this period.

Harry and Sarah were also among the first residents of The Cedars of Chapel Hill retirement community, where they moved in 2004. They embraced new neighbors, many of whom became cherished friends. Sarah, a skillful Mah Jongg player, organized a weekly game and introduced many Cedars’ residents, as well as her grandchildren, to the joy of declaring “Mah Jongg” at the end of a winning round.

Family was at the center of Sarah’s life through each stage and place. She was a dedicated daughter, and loving sister, cousin and aunt. She was the love of her husband’s life and adored by her children and grandchildren, who were her pride and joy. In her, they had more than a mother and a Bubby, they each had a cheerleader, confidante, promoter, teacher, companion and best friend.

Also surviving are sisters-in-law, Lucille Kittner Frank of Portsmouth, Va., Ida Kittner of Norfolk, Va., and Constance Kittner of Philadelphia, Pa.; and Sarah’s 13 nieces and nephews and their families. In addition to her parents, Louis and Berta Kornblau, and her husband of 60 years, Harry Kittner, she was preceded in death by her brother, Sam Kornblau and his wife, Helen, and her daughter-in-law, Kim Kittner.

The family wishes to express our deep appreciation to Dr. Whitman Reardon and her associates at Chapel Hill Internal Medicine and UNC Healthcare for their excellent care over many years. And, for their compassionate care in recent months, we wish to thank Dr. Lindsay Wilson, Tracy Ragan, Delia Holman and Maria Ivy; the staff of the Cedars and the Dubose Health Center and Cedars Home Health; and the staff of AuthoraCare Hospice. Together, she and we have been on a journey, and they have provided skill, strength and comfort for which we will be forever grateful.

A graveside service will be held at the Kehillah Section of Markham Memorial Gardens on Friday, December 16 at 10:30 a.m.

In lieu of flowers, contributions can be made to Halifax Community College, Kittner Family Scholarship Fund; Kehillah Synagogue; UNC Kittner Eye Center; or the charity of one's choice.