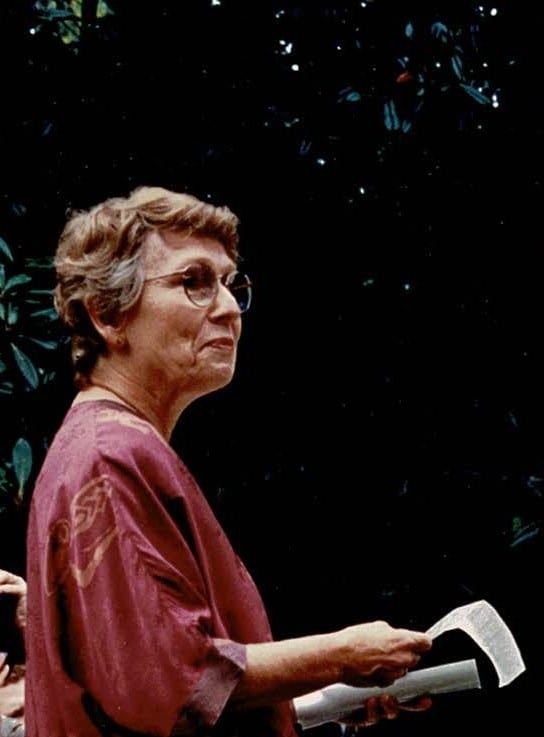 Sandy Eisdorfer, 1930-2021, was born and raised in Brooklyn, New York, to Samuel David Greenberg of Ellenville, NY and Mary Miller Greenberg of Minsk, Russia. Her father, despite the multiple jobs he took in order to feed his family, found the time to read to her from Keats and Shelley and Byron, episodes that presaged her life’s great love: the written word.

Sandy graduated from Brooklyn College and then from Pratt Institute, where she received a Masters of Library Science. She took a job at the New York Public Library, where she met Carl Eisdorfer, when he checked out The Red & The Black by Stendahl. The couple married in 1955 and lived on Pierpont Street in Brooklyn.

During the Korean War while Carl served in Okinawa, Sandy worked as assistant to the librarian at the Institute for Advanced Study in Princeton. There, she met both Albert Einstein and Robert Oppenheimer.

The couple moved to Durham, where Carl took a teaching job at Duke University. In the early 1950’s, Durham was not cosmopolitan bright light that it is today. The couple had to get used to a new lifestyle. For example, there was one “foreign foods” shop in town, where bagels were considered as exotic as the chocolate-covered ants with which they shared a shelf.

Sandy’s three children were born in Duke Hospital, third floor, all within the space of four years. Once, her obstetrician observed that “she never missed a meal;” Sandy entered the hospital in labor, gave birth, ate lunch.

Sandy raised the kids and meanwhile, she worked outside the home as well as in it: as an assistant teacher at a local high school, as editor of a humanities newsletter at Duke, and then, as copy-editor at the Duke University Press, pre-computer. Always, the dining room table was covered with index cards detailing grammar errors, points of style, questions of content.

After her divorce, Sandy took a job at the University of North Carolina Press, first as copy-editor, then as managing editor and acquiring editor, where she found and advocated for the first scholarly feminist books in the press’s publishing history, and indeed, some of the first in scholarly publishing in the United States.

Her son, Marc Eisdorfer, died in 1992 of Aids. His obituary, which Sandy wrote and which was published by the N&O, the state’s flagship newspaper, called the disease by name-something which had not been done before in an obituary in a North Carolina newspaper. Later she founded a linguistics scholarship in Marc’s name at UNC.

Always, she read and wrote. Many of her poems and essays have been published in journals all around the country. Her letters to the editors of various and sundry rags were legendary, both in wit and in sheer quantity. Open the New York Times or The New Yorker and you were likely to see her opinion on a book review she loved or on one she thought had gone awry. It was not possible to read the same copy of a book she’d read without gaining a window into her mind: the penciled exclamations, underlining, and of course, copyedits, told the story of what she thought as she read. She taught both poetry and the art of the personal essay at Ollie at Duke and then again at Peer Learning in Chapel Hill for many years and was beloved by her students.

Sandy was expert in the nearly lost art of asking questions of strangers and friends alike. This admirable quality gave people time and space to talk about themselves, and in this way, she gathered friends from around the world.

Among her great loves were, in no particular order: her pet dogs (whom she named after minor Shakespearian characters), left-wing politics; the borough of Manhattan; the symphony, Fado (the great Brazilian blues-music); Scrabble, whipped cream, the state of New Mexico where she lived for many years following her retirement, and the New Yorker magazine to which she subscribed for almost three quarters of a century.

She is pre-deceased by her son, Marc; her great friend Nanette Vonnegut Mengel; Bernard Entman, her companion of twenty years; and her brother, Al Greenberg.

In lieu of flowers, please donate to the Marc Adam Eisdorfer Award in Linguistics at the University of North Carolina Chapel Hill. Sandy requests that we all be sure to vote in every election for the person who believes in justice for all.

To order memorial trees or send flowers to the family in memory of Sandra Eisdorfer, please visit our flower store.