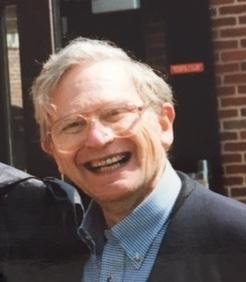 DURHAM- Ramon Scheer, son of Samuel Scheer and Gertrude (Gussie) Weisfeld Scheer died on October 16, 2020 in Durham, NC, where he lived the final 2 years of his life.

Ray was born on April 6, 1928 in Brooklyn, NY and raised in Jamaica, Queens. He attended City College in NYC and earned a Master’s in Education from Rutgers University while he worked full time as a teacher.

Ray married Beverly Scheer (born Beverly Elaine Rosen) in 1950 two years after their first meeting. For most of his career he taught junior high social studies in Newton Township in northern NJ. While there he was the head of his teachers association: a volunteer job that he loved. He retired from teaching at the age of 60 when he and Bev moved to Williamstown, MA; they lived in Williamstown for 28 years. For ten years of this period they ran a bed and breakfast called Goldberries; they were also vital and active members of the community.

Ray was a devoted husband to his wife Beverly whom he adored. They were together for nearly 68 years and, like their favorite movie, lived a truly “wonderful life” filled to the brim with love. Bev predeceased Ray in July, 2018.

A few years back Ray told each of his four children that he had lived a glorious life, had the most marvelous wife and kids and felt nothing but gratitude.

He was a humble man who loved to tell a good joke or recite an Irish poem; he came from the Jewish working class and made everyone with whom he interacted feel a sense of ease and worthiness. He was a true “mensch.”

Ray is survived by his children: the oldest, Sam and his wife Rosetta Marantz Cohen, Marjorie Scheer and her husband Maximino Vargas, Gene and his wife Kristina Scheer-Lechowski, and Michael, his youngest son. He is survived as well by his granddaughter Elizabeth Cohen Scheer.

Donations in memory of Ray may be made to the Berkshire Food Project: https://www.berkshirefoodproject.org/ or 134 Main Street – PO BOX 651, North Adams, MA 01247

Your memories of Ray and Bev would be most welcome.

No local service is planned at this time.

To order memorial trees or send flowers to the family in memory of Ramon Scheer, please visit our flower store.