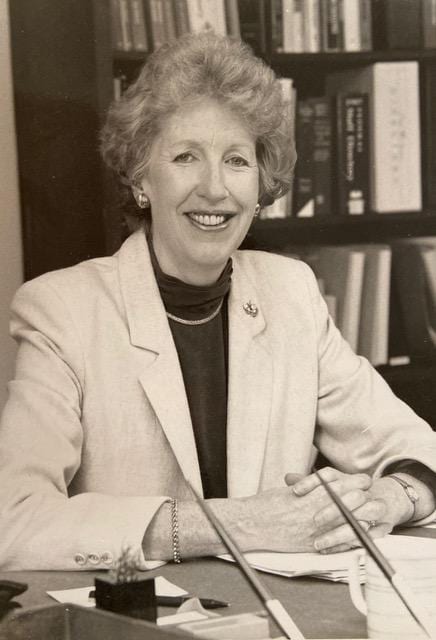 Patricia Goodwin Norry died peacefully at her home in Durham, North Carolina on October 14, 2020, with her loving husband, Len, by her side. She was born August 5th, 1934 in Cincinnati, Ohio to Robert Clifford Goodwin and Marion Schmadel Goodwin. Seven years later, her family moved to Washington, D.C. The oldest of five children, she spent many years looking after her brothers Fred and Cliff (of blessed memory), as well as Bob and Jim, who survive her. She graduated from The Academy of the Holy Cross High School in 1952, earned a B.A. in Psychology from Seton Hill College (1956), and completed graduate work in clinical psychology at George Washington University.

Following in her father’s footsteps, Pat began her 44 year career with the Federal Government at the Atomic Energy Commission (AEC) as Staff Assistant to Chairman Glenn Seaborg in 1961. She served as an Environmental Analyst from 1969 to 1972.

In 1968, Pat was selected to complete a yearlong Fellowship for Graduate Study in Public Administration from the National Institute of Public Affairs at Stanford University. While at Stanford, she met Leonard Norry, an employee of the Census Bureau who was also completing the fellowship. Pat and Len married on December 5, 1969 at her parents’ home in Washington, D.C. Their first and only child, Douglas, was born in 1972, and they lived in Chevy Chase, Maryland for many years, surrounded by a large family.

When the AEC split into the Nuclear Energy Commission (NRC) and the Department of Energy, Pat’s career took her to the NRC in 1975. After five years as Deputy Director, she was promoted to Director, Office of Administration in 1982, a post she held for 15 years. In 1997, she advanced to become Deputy Executive Director for Management Services, and she remained in this role until her retirement in 2005. Pat held a wide variety of leadership roles during her many years of public service: Board Chair of the Energy Federal Credit Union, Chair of NRC’s Performance Review Board, and Chair of the Executive Resources Board Special Review Group, which focused on management opportunities for women and candidates of color, to name only a few. She was twice awarded the Presidential Rank for Meritorious Service (1984 and 1991), and she earned the Presidential Rank for Distinguished Service in 1996. Described by her co-workers as “one of a kind,” Pat left her mark on the NRC in countless ways, including mentoring a generation of women seeking to follow her example as a successful, accomplished executive in the Federal Government.

Pat and Len relocated to Durham, North Carolina in 2014 to be near their son, daughter-in-law (Carrie Sloan Norry), and three grandchildren (Will, Emily, and Kate), whom she adored. She relished her role as a wife, mother, grandmother, sister, and aunt, and she enjoyed frying chicken for her 50+ family members who gather in Rehoboth Beach, DE every summer. Pat and Len celebrated their 50th anniversary in Rehoboth in 2019. She will be remembered for her fierce independence coupled with her 51 year partnership with Len, her trailblazing career which opened doors for future generations of women, her Santa Claus collection and love of Christmas, and her eagerness to play Monopoly and card games with her grandchildren.

A private graveside service will be held for family.

To order memorial trees or send flowers to the family in memory of Patricia Goodwin Norry, please visit our flower store.