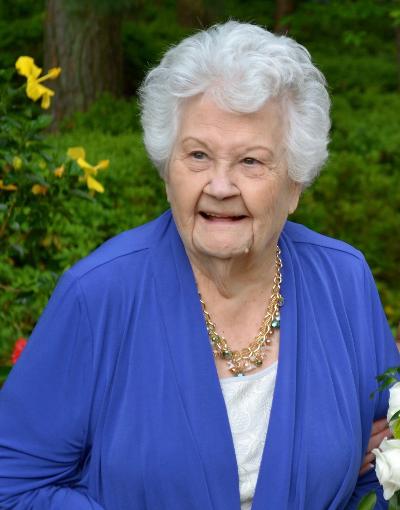 Mrs. Storey was born October 24, 1925 to the late Charlie and Esther McGhee in Durham, NC. She retired from American Tobacco Company after 42 years. Mrs. Storey was an active member of Angier Avenue Baptist Church.

Mrs. Storey, known to most as “Grace,” was an excellent cook for both her family and church community. She was always a warm and inviting host to whomever she met. Her seriousness was balanced with a joyful wit. She will be remembered as a loving and devoted wife, mother, grandmother, and great-grandmother.

Friends and family are invited to attend the visitation that will be held at 1:00pm Monday, October 12, 2020, with the funeral service immediately following at 2:00 p.m. at Hudson Funeral Home Chapel. Officiating will be Rev. Richard Streib. Burial will follow at Woodlawn Memorial Park.

Flowers are acceptable or memorial contributions may be sent to Bible Baptist Church of Creedmoor, NC at 2047 Gate Number Two Road Creedmoor, NC 27522 or online at https://www.biblebaptistonline.org/give

Hudson Funeral Home will be observing social distancing for the services and asks everyone in attendance to wear a mask.

To order memorial trees or send flowers to the family in memory of Naomi Grace McGhee Storey, please visit our flower store.