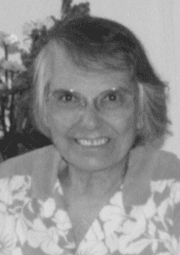 Miriam Kresses Slifkin lived her life with grit and determination.  She was cherished by her family, beloved by her husband and admired by people across North Carolina.  She died on August 28 in Chapel Hill.

Born on May 24, 1925 in Birmingham, Alabama to Emma and Hyman Kresses, she grew up in Birmingham and the small town of Pell City, with 3 sisters and a brother.  Their childhood was one of a close family struggling with few resources during the depression.

Miriam took on significant responsibilities at a young age – caring for the cow, collecting eggs, growing vegetables, and cleaning the house. Pressure to contribute financial support mounted when one of her sisters became fatally ill resulting in enormous medical debt. Beginning when she was 12, Miriam worked in different jobs after school and Saturdays, often 7am to midnight.

Her childhood was not without fun, however.  She loved the outdoors and music.  In high school she was introduced to the viola which became a life-long passion.  Early on she blazed new territories.  While in high school, for instance, she convinced school officials to let her (a girl) take electricity class.

Miriam wanted to go to university- but it seemed impossible, as her family needed the income she could earn.  None-the-less, she enrolled at the University of Alabama, working full-time to pay tuition and send money home. Upon graduation with a science degree, Miriam worked at a laboratory in Birmingham. However, after advocating for African-American co-workers, threats were made against her life and she was forced to leave Alabama. She fled to New York City.

There, by serendipity, she re-met Larry Slifkin.  Larry and Miriam had met three years earlier during WWII when Larry was stationed in Alabama.  For Larry it was love at first sight.   But Miriam did not fall in love until she saw him again in NYC.  Although Larry was warned that Miriam had “piss in her blood,” they were married on July 4, 1948, a day they would call “interdependence day.”

In 1955 the Slifkins moved to Chapel Hill.  They raised their 4 daughters in a house surrounded by woods where Miriam loved identifying birds, mushrooms, trees and wildflowers with her children and grandchildren. Amid pressures for mothers to stay out of the workplace, Miriam continued her career as a scientist at the Botany Department at UNC.  She earned a PhD in mycology and worked at NIEHS in RTP and labs in London, Oxford and Saclay, France.  The work Miriam published was significant.  An international conference held in England was devoted to her work and that of mycologists inspired by her findings.

Despite her scientific success, Miriam and other women scientists were suddenly fired by a new NIEHS director in 1972. Not one to take this passively, Miriam investigated. She uncovered rampant discrimination and sexual harassment throughout her branch. With that, Miriam made the life-changing decision to bring a class action complaint against the government. The EEOC found the complaint credible and many women employees benefited.  However, for Miriam, it meant a change of her life’s direction.

Her energy now focused on the Women’s Movement.  She became active in the National Organization for Women. While president of the state chapter, the Equal Rights Amendment was being debated in the NC General Assembly.  She tirelessly travelled across North Carolina speaking on behalf of its passage.  Despite threats against her safety and vandalism to her car, she was never intimidated nor were her efforts slowed.

In 1973 Miriam led the drive to establish the Orange County Rape Crisis Center, believed to be the first in North Carolina.  Rape was a subject rarely discussed at that time, but she was determined to end that silence and to provide help and emotional support to rape survivors.

At UNC, Miriam served as an advisor to women students working to establish a women’s studies program, gave frequent speeches to the university community and spear-headed a successful campaign to open the Morehead Scholarship program to women.  She also succeeded in bringing the EEOC to Chapel Hill to investigate UNC’s discriminatory practices in wages, hiring and admission.  This investigation resulted in positive changes for female students, faculty and employees.  In 1980 she was inducted into the Order of the Golden Fleece, UNC’s most prestigious honorary society, for her service and leadership within the UNC community.

In retirement, Miriam and Larry traveled extensively, attended and taught classes at Shared Learning, enjoyed countless plays and concerts, and volunteered with numerous organizations. Being with their family, however, gave them the greatest joy. Larry predeceased Miriam on December 2, 2019.

To order memorial trees or send flowers to the family in memory of Miriam Slifkin, please visit our flower store.