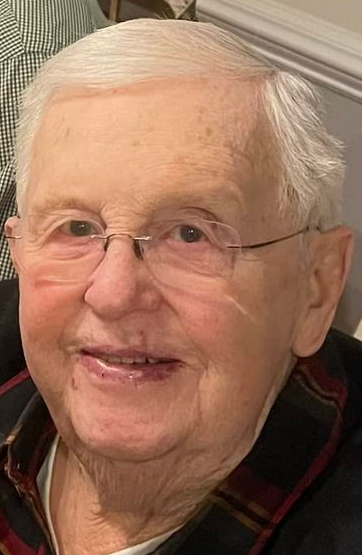 DURHAM – Ecclesiastes 3:2 There is a time to be born, and a time to die. Melton Douglas “Doug” Lynam, 87, of Durham, died Wednesday morning, June 22, 2022, and is now at home for all eternity with his Lord and Savior, Jesus Christ.

Mr. Lynam was born at home on Falls of the Neuse on June 19, 1935, to Alexander Melton and Moda Belle Leonard Lynam. He graduated from Durham High School in 1953 and from Croft Business College also in Durham.  He later attended Elon College and completed his degree in Accounting.  He began his career as an Accountant for Erwin and Company Stock Brokerage and later became a Stock Broker. The Brokerage firm changed its name from Erwin and Company to J Lee Peeler which was in Downtown Durham. Years later, J Lee Peeler became Morgan & Keegan.  Mr. Lynam enjoyed working in the Stock Market for 50 years which he retired in 2004. He was preceded in death by his wife, Carolyn Higgins Lynam.

Mr. Lynam loved his church, Grove Park Chapel on Sherron Road in Durham, which was formerly the Gospel Center.  He placed his faith in Jesus Christ at the early age of 14 while attending a Bible Tent Meeting, shortly after, he joined the choir.  He was so excited about his faith that he brought his parents to church, where they too accepted Jesus Christ as their personal savior. Mr. Welcome Detweiler, pastor of the Gospel Center took a lot of time with Doug and taught him how to take care of the church’s yard.  Doug had a great passion for taking care of the church for more than 66 years. He was a Deacon and the Building Superintendent at the church – this was his ministry. He enjoyed decorating the church for Easter, Fall, Thanksgiving and Christmas. He was a faithful servant until his declining health no longer allowed him to do so. Doug was also an avid Duke Basketball fan.

Funeral Services will be held on Tuesday, June 28, 2022, at 2 p.m. at Grove Park Chapel. With Pastor Dale Brooks and Pastor Rod Sharp officiating.  Interment will be held at Woodlawn Memorial Park.

The family will receive friends Tuesday, June 28, 2022, from 12 noon to 2 pm prior to the services at the church.  In lieu of flowers, memorial contributions may be made to Grove Park Chapel, 805 Sherron Road, Durham, NC 27703 in his memory.

The family would like to thank so many for their love, support, prayers and food.  Special thanks to Duke HomeCare and Hospice.

To order memorial trees or send flowers to the family in memory of Melton Douglas “Doug” Lynam, please visit our flower store.