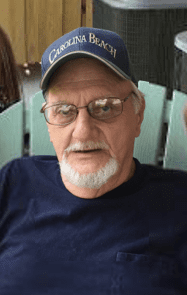 A combined visitation and service will be held for Lonnie “Doodie” Wayne Matthews, Sr. and Virginia Martin Gooch Sessoms.

Lonnie was born February 25, 1936, to the late Arto A. and Mildred Buchanan Matthews. He was a fireman with the City of Durham for 18 years and was one of the first crew members to staff the Rescue truck in the 1960’s. Doodie was in the body shop profession for many years, working for Matthews and Farrow, Matthews Body Shop, and as the owner of L.W. Matthews Body Shop. He loved Carolina Beach and relocated there in 1990. Doodie never met a stranger and loved his family. He will be deeply missed.

In addition to his parents, Mr. Matthews was preceded in death by his daughters, Karen Matthews and Cindy Buck; brother, Bud Matthews; and sisters, Hilda Paschall and Dot Rigsbee.

Flowers are acceptable or memorial contributions can be directed to The Masonic Home for Children at Oxford, 600 College Street, Oxford, NC 27565 or online at https://my.simplegive.com/App/Giving/mhco.

To order memorial trees or send flowers to the family in memory of Lonnie Wayne “Doodie” Matthews Sr., please visit our flower store.