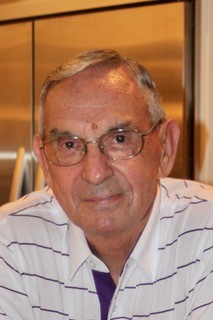 Mr. Spell was born in Sampson County, NC, but moved to Durham in 1949 when his family retired from farming. It was a short while later that he was introduced to a young girl named Mary Elizabeth. They eloped when he was 18 and she was 16 and were married for 69 years. Mr. Spell was a veteran of the US Army and worked for A&P Grocery for 40 years, with many of those years managing the meat departments in various locations throughout Durham. He also moonlighted as a butcher for Garrad’s Sausage. After his retirement, he spent many years transporting cars for various dealerships in the Triangle area. In his downtime, he enjoyed fishing and tinkering on lawnmowers in his workshop. His home was his castle and he felt blessed that he and Mary could call it theirs but his greatest love was his family. Nothing made him happier than to be surrounded by his children and he always told each of them, “I really do”. His hugs will be greatly missed.  He was a Christian and a member of West Durham Pentecostal Holiness Church.

A private family service will be held.

The family would like to thank those special family and friends who shared their time and love with him, as well as the staff at Falls River Court, for their kindness and care of this exceptional man.

To plant a tree in memory of Laxton P. "L.P." Spell, please visit our Tribute Store.

To order memorial trees or send flowers to the family in memory of Laxton P. “L.P.“ Spell, please visit our flower store.