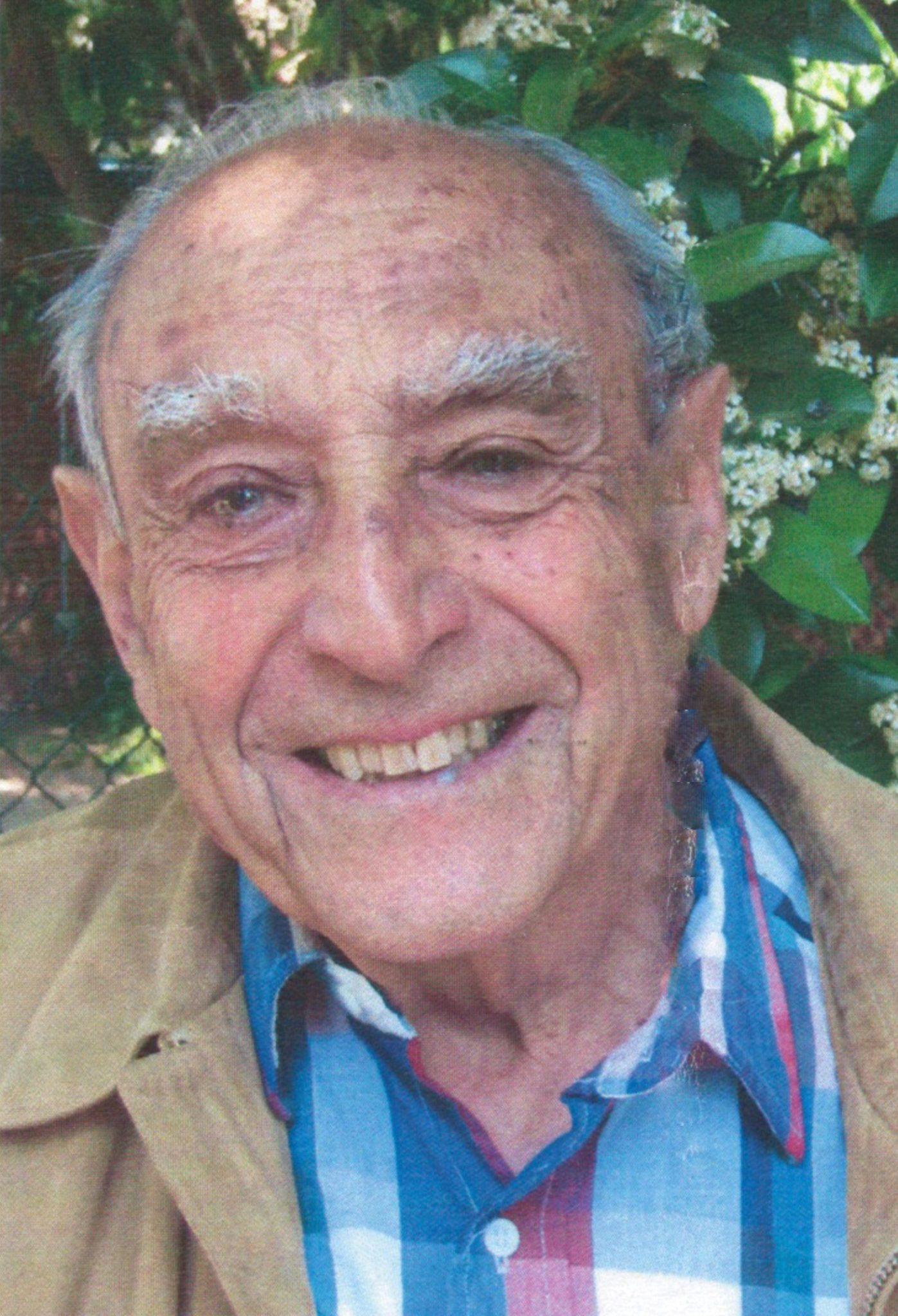 Lawrence M. Slifkin was born on September 29, 1925 in Bluefield, West Virginia to Isaac and Eva Baden Slifkin. He died on December 2, 2019 in Chapel Hill.

Larry lived with enthusiasm and passion. Growing up in Bluefield, even during the depression, always seemed to Larry to have been a dream childhood. Like most, his family had little material wealth, but people in the town looked out for each other and for the town’s children. Weekends and summers were spent hiking in the mountains- a passion Larry continued into old age.

Economic conditions forced the family to leave Bluefield while Larry was still in high school. He entered NYU on a track and field scholarship, then was drafted out of college into the Army. While in the military two important events would change the course of his life.

Stationed in Alabama, he met Miriam Kresses at a local dance. The next day her father, who knew nothing of their prior meeting and who routinely invited Jewish soldiers home for Sunday dinner, invited Larry. Four years later, on July 4, 1948, Larry and Miriam married- a day they would call “Interdependence Day.” They remained married for 71 years; until Larry’s death.

The second important event was political, though to Larry, it was about simple fairness. Having been promoted to the rank of acting corporal, Larry was assigned to a platoon of African-American troops. At that time, the military was racially segregated and different rules were in place for non-White troops than for the White ones. White troops were given home leave before deployment. But that wasn’t necessarily the case for the African-American troops.

As the training period ended for Larry’s troops, the commanding general came to inspect the unit before deployment abroad. The general asked Larry if all was satisfactory. In a violation of military protocol Larry said “NO, SIR!” and he proceeded to demand leave for his men. The troops were given leave, but Larry was demoted and re-trained, delaying his deployment and sparing him of combat. He was shipped to Okinawa as part of the occupation force and coincidentally was reunited with some of his African-American troops there.

Larry graduated from NYU and obtained a PhD in physical chemistry from Princeton University, in 1950. After faculty positions at the University of Illinois and University of Minnesota, the Slifkins moved to Chapel Hill in 1955 because Miriam could not tolerate the cold of the Midwest. Larry took a position in the UNC Physics Department where he established the nascent experimental physics program.

He was an active member of the UNC faculty, receiving continuing grant support for an ever- growing research program and teaching physics, for which he won a number of student-selected and university awards. He was also active in university affairs- serving as faculty advisor to the Fine Arts Committee and for years on the Faculty Athletic Committee. As a former college athlete, he raised concerns about the corrupting influence of money in college sports and the time and travel pressures put on student-athletes. Unfortunately, little came of these efforts.

Larry also was involved in the community life of Chapel Hill and UNC- attending plays, lectures, concerts, art exhibits and playing trumpet in the University Orchestra. In the 1950s and 1960s he was involved in local politics. This was a time during which the civil rights movement was a part of life in Chapel Hill. One of the first graduate students accepted by Larry, in 1958, was perhaps the first African-American student in the Graduate School of Arts and Sciences. Although some questioned his judgment in making this decision, Larry’s response was that the student was qualified.

For many years he participated in Reverend Charlie Jones’ non-violent picketing program, boycotted businesses and supported the desegregation of the Chapel Hill Public Schools. From the 1970s onward, Larry was also an active supporter of his wife’s work in the feminist movement at UNC and in the community and state.

Being on the UNC faculty enabled Larry to take sabbaticals in Oxford, London, Paris and Tel Aviv. Along with Miriam he enjoyed international travel visiting much of Europe, Israel and Japan. Their joy in traveling continued into their late 80s.

Following his retirement as a Distinguished Emeritus Professor, Larry began two “second careers.” One was music. He played trumpet in multiple local bands including The Village Band, Triangle Jazz Ensemble, and the Magnolia Klezmer Band. In addition, he returned to school. As a science major in college, he never felt he had time for his love of literature. So for over 20 years he audited classes in the English department. In 2011 he was invited to speak to their graduates at Commencement- an honor he took very seriously. In recent years Larry and Miriam have lived at Carol Woods where they have been regulars at music concerts, films and lectures.

He was a devoted family man. Among the many ways he professed his love to Miriam included painting “Larry loves Miriam” in big bold letters on the sidewalk beside their home. He and Miriam raised four daughters together. He read books to them every night, frequently engaged them in political and academic discussions and took them hiking and camping. He made sure to be even more involved in the lives of his grandchildren.

It was a life lived fully.

In lieu of flowers, donations may be made to the Inter-Faith Council for Social Service ifcweb.org or the Triangle Land Conservancy triangleland.org.

A graveside service will be held 12:00 p.m. Thursday, December 5, 2019 at Durham Hebrew Cemetery. Officiating will be Rabbi Daniel Greyber.

To order memorial trees or send flowers to the family in memory of Lawrence M. Slifkin, please visit our flower store.