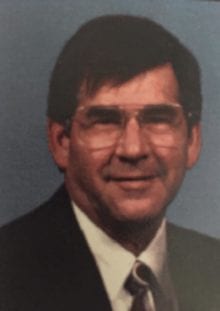 DURHAM- Mr. Jim Meredith Barringer, 82, passed away Friday, October 4, 2019.
Mr. Barringer was born on January 5, 1937 to John and Katherine Barringer in Salisbury, NC. Jim served in the National Guard for 8 years and retired from Durham Exchange Club Industries as facility manager, where he later served as President of the Board. He also served as President of the Durham Exchange Club. Jim was the President of the Board of Directors for the Parkwood Volunteer Fire Department, where he served for 25 years, and was awarded the Durham County Honorary Fire Chief Award. Jim was a charter member of the Exchange Family Center and served to prevent child abuse for 26 years. He was a longtime member of the Gideons International and was very active at Berea Baptist Church, where he was Deacon Emeritus. Jim also received the Civitan Outstanding Citizen Award. One of his passions was surf fishing at Ocracoke, NC. He will be remembered as a loving husband, father, grandfather, and great-grandfather.
Mr. Barringer was preceded in death by his parents; son, Andy Barringer; brothers, Charles Barringer and Jerry Barringer; and sister, Mary Barringer. He is survived by his wife, Peggy Barringer; son, Tony Barringer (Vicki) of Hillsborough, NC; daughter-in-law, Amanda Barringer; brothers, John Thomas Barringer, Jr. (Pauline) of Florida, and Richard K. Barringer of Salisbury, NC; sister, Mildred Jean Curtis (Charles) of Virginia; grandchildren, Ashley Barringer, Cory Barringer, and Colton Barringer; great-grandchildren, Nathan, Ben, and Charlie.
A visitation will be held on Sunday, October 6, 2019 from 6:00 to 8:00 p.m. at Hudson Funeral Home.
A funeral service will be held at 11:00 a.m. on Monday, October 7, 2019 at Berea Baptist Church. Officiating will be Reverend Phil Mumford and Dr. Robert Wortham. Pallbearers will be Dennis Massey, David Hutson, Charles Bartee, Ken Gregory, Dawn White, and Alan Wayne. Burial to follow at the Berea Baptist Church Cemetery.
In lieu of flowers, memorial contributions can be made to Berea Baptist Church at PO Box 110343 Durham, NC 27713, or to the Exchange Family Center at www.exchangefamilycenter.org.

To order memorial trees or send flowers to the family in memory of James Meredith “Jim” Barringer, please visit our flower store.