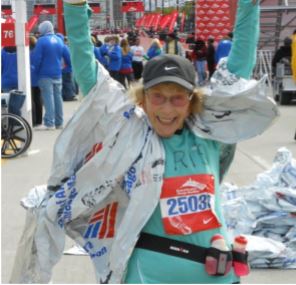 Although she became a diehard Brooklyn Dodgers fan, Mrs. Vinegar was born only blocks from Yankee Stadium in The Bronx on June 11, 1926, to the late Dr. Charles and Helen Steinhauser. After briefly attending Columbia University in NYC, her education was derailed by The War, and she was married to Ralph Vinegar in 1948. After raising her kids in Spotswood, NJ, Armonk, NY, and Raleigh, NC, she became divorced, went back to school, took up marathon running and started her life anew in Raleigh at the age of 52. She sold her wedding ring, an heirloom piano, and worked fulltime as a legal secretary to pay for her education. After graduating from NC State with a bachelor’s degree in Writing and Editing, she started her own company, Write-Away, and became a feature writer specializing in real estate for the News & Observer. Mrs. Vinegar is a past president of the Spotswood NJ PTA, an early member of the Raleigh Racquet Club and a proud member of the NC Roadrunners (NCRR). Though she was a highly competitive tennis player, she credits running and the supporting low-fat dietary regimen with saving her life. In her own words, “at 52, divorced, overweight, and down in the dumps with high cholesterol, I literally ran for my life and haven’t stopped running since…” She ran in countless 10K’s, half-marathons and over ten full-marathons: Raleigh, Outer Banks, Virginia Beach, Richmond, Chicago, Philadelphia and twice in New York City and the U.S. Marine Corps. Her last marathon was in Chicago only thirteen years ago at the age of 83.

In addition to her parents, she is preceded in death by her sister, Rosalind Oliver.

In lieu of flowers, memorial contributions can be directed to the Alzheimer’s Association, www.alz.org/?form=alz_donate or the Crisis in Ukraine at www.help.rescue.org/donate/ukraine-web

To plant a tree in memory of Iris June Steinhauser Vinegar, please visit our Tribute Store.

To order memorial trees or send flowers to the family in memory of Iris June Steinhauser Vinegar, please visit our flower store.