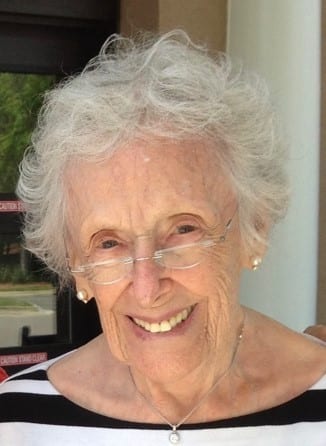 Irene Hackel (née Goos), a resident of the Forest at Duke, passed away on August 18, 2020 at the age of 96. Pre-deceased by her best friend, lifelong partner and husband, Dr. Donald Benjamin Hackel (1994), Irene is survived by her three children (Connie Katz, Dr. Andrea Hackel and Richard Hackel), seven grandchildren (Lauren, David, Philip, Sonia, Elizabeth, and two Benjamins) and five great grandchildren.  Irene was born on November 29, 1923 and raised in Bangor, Maine.  Her parents were immigrants from the pogroms and anti-semitism of Poland, arriving in Maine in 1918, where they ran a farm and traded cattle.  Irene studied nursing at Beth Israel Hospital in Boston where she worked in the blood bank and met her future husband.  The couple moved to Cleveland when Don joined the staff of Western Reserve School of Medicine (now Case Western Reserve).  Their three children were born in Cleveland.  In 1960, Irene and family moved to Durham, N.C. when Don joined the faculty of the Duke University School of Medicine.  Irene was actively engaged in and helped to establish the Nearly New Shoppe which raised funds to provide scholarships for Duke medical students.  She was also an active member of Beth El Synagogue, Hadassah, and the League of Women Voters.  Irene was a creative and superb cook whose baked goods were much in demand by her family and friends.  Contributions in Irene’s memory are welcome to the Donald B. Hackel Fellowship in Cardiovascular Pathology and to the Beth El Synagogue, Durham, N.C.

To order memorial trees or send flowers to the family in memory of Irene Hackel, please visit our flower store.