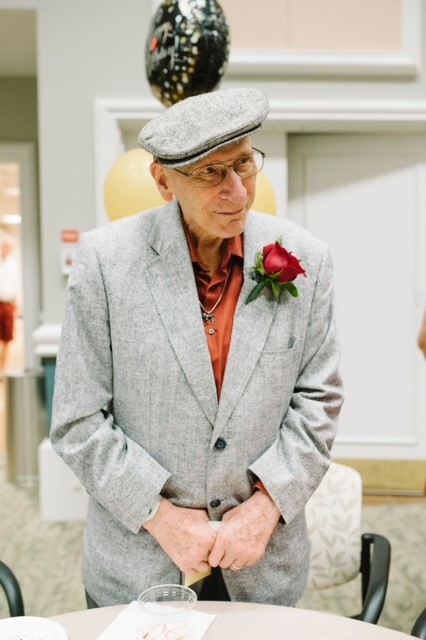 Dr. Carson was born to Jewish immigrant parents Bertha Shapiro and Saul Carson on October 3, 1929 in Philadelphia. Bertha raised Herbert and his older brother Alfred in a loving home. Highlights of his youth included a memorable trip by car to the west coast, with many adventures for young Herbie and Alfred before they returned to the east coast. After graduating from Bartram High School in Philadelphia at the age of 16, Herb wanted to join the army and help with the war effort, but he was too young and had to get a note from his mother to enlist. He also failed the vision exam, but a kind sergeant helped him pass on a second try. By the time he finished basic training, the war was over, and Herb was assigned to the army of occupation in Japan. Herb’s primary job there was overseeing a hotel where officers stayed as they were being transferred around Japan.

After returning from Japan, Herbert began to pursue his post-secondary education, using his GI bill to enroll in classes at Columbia University. While it might come as a surprise to people who know Herb as a scholar, author, and teacher, his knowledge of the mechanics of English, having grown up in a family of immigrants, was such that he enrolled in English as a Second Language before taking other courses in the subject that eventually became such an important part of his life. As his GI Bill funds began to run out, Herb’s Uncle David Carson stepped in and offered him a place to live in Pittsburgh if he came there to continue his education. Herb gratefully accepted his uncle’s generosity, and we are all grateful that he did, because it was there, while they both worked in a University of Pittsburgh production of Oedipus Rex, that Herb met the love of his life, Ada Lou Siegel.

Herb and Lou became engaged, and were married on May 31, 1953, taking their honeymoon in the Appalachians during the week between classes and graduation, since they both had high enough grades that they did not need to take final examinations.

They soon moved to New York City to pursue Master’s degrees at Columbia Teacher’s College. Upon completing their degrees, they moved to West Orange, New Jersey, where Herb was the theater director and taught English. Soon it was time for them to pursue their doctorates, and they moved to Minnesota, Herb pursuing a degree in drama, and Lou in English (American Literature). They both taught at the University of Minnesota, and while they were there (December 1956), they had their first child, William.

When Herb finished his coursework, he was hired by the University of Nebraska at Lincoln to teach in the Theatre Department. Their time in Nebraska was productive, with Herb finishing his dissertation, and the birth of their daughter, Rosalyn. After one year at UN-L, however, they left for Michigan, moving to Ferris Institute (later Ferris State College and after that Ferris State University), and a home in Big Rapids, Michigan, where they lived for more than three decades.

Herbert taught a number of subjects at Ferris, including Theatre, Speech, Humanities, Bio-Medical Ethics, and Philosophy, and, like his wife, was a recipient of distinguished professor awards from the University and the state of Michigan. Herbert’s first book, Steps in Successful Speaking, was published in 1967. In 1970, Herb and Lou published The Impact of Fiction, and in 1979 they published a biography of the early American playwright, Royall Tyler. They continued to publish together, and separately. During his long career as an author, Herbert published over 500 books, book reviews, articles, and poems, many in collaboration with his wife, who also earned a doctorate at the University of Minnesota.

After an unsuccessful congressional bid in 1963, Herbert turned to more significant ventures, as he and Lou had their third child, Bryan, in 1965. Herb and Lou were amazing, dedicated parents, supporting their children every step of the way while they were at home, and after they left to pursue higher education. All three children hold the highest degrees in their fields (William, D.M.A., Rosalyn, M.D., N.P., Bryan, L.L.D., Ed.D.

After three decades of teaching at Ferris, Herb and Lou retired to North Carolina in 1994, to be close to their daughter Rosalyn and her children. They remained devoted to their children and grandchildren (Anna, Eli, Marissa, Isabelle, Eric, and Zosia), even after Lou started her battle with cancer in 1996. After fighting cancer for nearly a decade with her husband at her side, Lou succumbed on February 3, 2007. Herb continued to be a devoted father and grandfather in retirement, and recently, with the birth of Ada Lou DeWitt Jenkins, Misha Kay DeWitt, and Lydia Mae Pennington, he relished his new role of great-grandfather, coining his own nickname, “GG.”

Herbert celebrated a wonderful 90th birthday in 2019, just before the pandemic, surrounded by loving family and friends. As his health began to decline, his daughter Rosalyn, son-in-law Toby, and their children spent countless hours caring for him, and his children Bryan and William (and Bill’s wife Laura, daughter and son-in-law Marissa and Justin, and son Eric) visited and called as often as possible, bringing joy into his last few years.

On the afternoon of Saturday, July 23, 2022, Herbert breathed his last breath with his daughter Rosalyn holding him. His memory will live forever in the lives he changed for family members, students, and friends alike.

In addition to his parents, Dr. Carson was preceded in death by his wife of 53 years, Ada Lou Siegel Carson; brothers, Alfred and Paul Carson.

A funeral service will be held Monday July 25, 2022, at 2 p.m. at Beth El Synagogue. Officiating will be Rabbi Salem Pearce. Interment will be at Durham Hebrew Cemetery, Durham, NC.

No flowers, please. If you wish to make a donation, please consider donating to the Hebrew Free Loan Society (hfls.org) or the Hebrew Immigrant Aid Society (hias.org).

To order memorial trees or send flowers to the family in memory of Dr. Herbert Lee Carson, please visit our flower store.