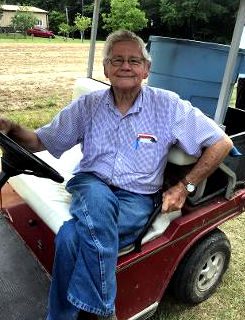 In addition to his parents, Mr. Bordeaux is preceded in death by his brothers, Jimmy, Dolphus and Gene Bordeaux; and a sister, Anne Holt.

Frank (or Papa Frank as he was known by so many!) loved everyone that he met! Other than the Lord, his greatest love was his wife, Billie! He was an amazing husband, father, grandfather, great-grandfather, son, brother, and uncle. He loved both his family and friends dearly. Frank retired from GTE after working in both Durham and Monroe, NC and treasured the friendships that he made during his career. He was a hugger and never met a stranger.

Frank loved being busy and some of his favorite activities included working in the yard and in the garden. It is understandable that as his health declined, one of his favorite places was on the front porch sitting, listening to the fountain in the pond and watching the birds and butterflies in his and Billie’s flowerbeds.

His life touched so many and we will all miss him, his hugs, his smiles, and his hiccups! Our loss here on this earth is truly Heaven’s gain.

To order memorial trees or send flowers to the family in memory of Franklin Delano “Frank” Bordeaux, please visit our flower store.