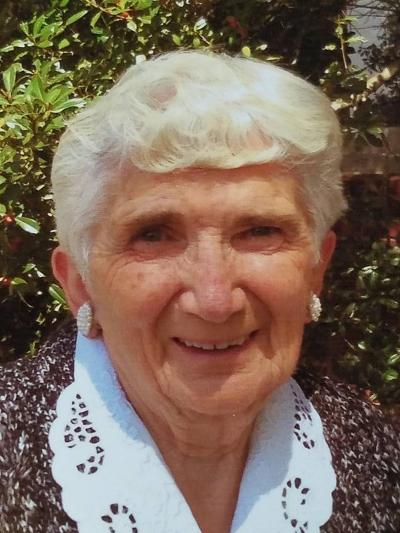 Elizabeth Frances Miller Marks, Lib to her friends and family, was born near Caldwell, Orange County, North Carolina to Hassie Irene McKee and Henry Richard Miller.  Elizabeth was the 3rd of 5 children born to Hassie and Henry, the others being Ira Thomas Miller, Henry Hurdle Miller, Lola Gertrude Miller and Guy Forrest Miller.  All are deceased save Guy.

Elizabeth was raised on Breeze Road in the Rougemont area and attended Caldwell schools, graduating in 1944.  Always athletic, Elizabeth played Basketball and Softball during high school, sports she also lettered in.  A favorite quote attributed to her in her Senior annual said, “It is better to wear out in being a good sport than to rust out in doing nothing.”  Even then, her favorite food was listed as Barbeque.

Elizabeth moved into Durham to work at the Ligget and Meyers Tobacco company after high school. She would eventually retire from that company after over 43 years of service, last working in the quality control division.  There, she met William Edward Marks, Bill to his friends and family. Bill predeceased Elizabeth on 12 January 2013. Bill and Elizabeth were married on 7 April 1951 in Emanuel County, Georgia.  They spent their early marriage years in Durham and on Breeze Road, near the McKee-Miller homestead.  Their sons, George Edward Marks and Carl Wayne Marks, were born while living on Breeze Road.  They moved into “town” on Weaver Dairy Road in Chapel Hill in December 1955 and let the city grow out to them.

Elizabeth loved her family and often she and Bill spent vacation time with her sister, Lola, as well as her brother-in-law, Gordon Marks and his girlfriend Ernestine Tew.  She embraced the love of her grandchildren when her sons married and had children of their own. She loved being outside on their eight-acre home on Weaver Dairy Road, planting trees and flowers and growing a garden, something the local deer were most appreciative of having. She had a horseshoe pitch installed and excelled at horseshoes, eventually entering the Senior Olympics and medaling in that sport.  Her bedroom wall was covered with over 100 neck medals and trophies from local, state and national competitions from 10 Senior Olympics. Elizabeth often traveled with and competed against her friend, Mo Roberts, in many of those matches.  Her final visit to the Senior Olympics was in 2017 in Birmingham, Alabama where she earned a gold medal in horseshoes at the age of 90. Elizabeth was a member of the Pitching Horseshoe Association. Over those many state and national Olympics, she also participated in basketball, football, softball throw, shuffleboard, bowling and walking the 5K.

Elizabeth was a devoted Christian and accepted Christ in her life at an early age.  She was raised in the family’s long time church home, Little River Presbyterian Church, where a great number of her Miller family relatives are buried. She later became a member of North Chapel Hill Baptist Church in Chapel Hill.

In lieu of flowers, the family suggests donations to Duke HomeCare and Hospice, American Cancer Society or a charity of your choice in Elizabeth’s honor.

To order memorial trees or send flowers to the family in memory of Elizabeth Miller Marks, please visit our flower store.