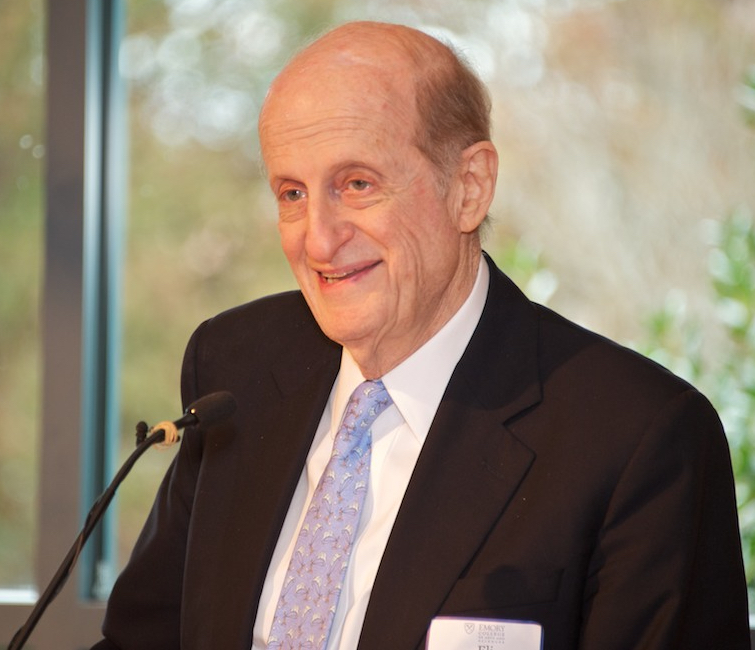 Eli Nachamson Evans, a philanthropic leader who championed Jewish culture, urban initiatives, and education, and wrote a celebrated memoir inspired by his North Carolina Jewish upbringing, died of COVID complications in Manhattan on July 26, 2022. The president emeritus of the Charles H. Revson Foundation and author of “The Provincials: A Personal History of the Jewish South,” and other works, was 85 years old.

The twin paths of Evans’ career – strategic giving and creative writing – were interwoven. In 2001, the American Academy of Arts and Sciences inducted the alumnus of University of North Carolina-Chapel Hill and Yale Law School for “his dual contribution to American letters and as a philanthropist of uncommon originality and leadership.”

At Revson, Evans’ ambition, as he wrote, was helping realize “the American dream: that minorities can be protected from the tyranny of the majority, that pluralism is possible, that respect for all peoples is not an impossible wish.”

Drawn to “the power of the idea,” he gave early support to projects that became cultural milestones, like public television’s “Heritage: Civilization and the Jews,” and Bill Moyers’ “Genesis: A Living Conversation.” The Revson-backed “Rechov Sumsum,” an Israeli Sesame Street, evolved into a Palestinian-Israeli co-production engendering cultural dialogue.

His executive demands dovetailed with the joys of family and literature.

A week during his Revson tenure, 1977 – 2003, might find him at the New York office selecting emerging civic leaders for the Charles H. Revson Fellowship, heading downtown for a stroll with beloved wife, Judith, son, Joshua, and their westie, Zelda, then speaking at a book event. In a 1990 colloquium on the South on the Mississippi riverboat Delta Queen, he was joined by authors William Ferris, Alex Haley and Shelby Foote, and blues great B.B. King.

A warm, often ebullient storyteller who played banjo and wore his Carolina blue Tarheels cap with attire both business and casual, he was equally at home in Manhattan, Jerusalem, and the American South. His admirers ranged from Mississippian Willie Morris, the Harper’s magazine editor who commissioned “The Provincials,” to Israeli statesman Abba Eban, who said of Evans, a passionate supporter of Israel: “The Jews of the South have found their poet laureate.”

“The Jewish South,” as Evans said on PBS’s “The Charlie Rose Show,” summoning Faulkner, “is my Yoknapatawpha.”

His devotion to engaging and helping others was rooted in his boyhood.

For young Eli the love of family and commitment to social justice were intertwined. In “The Provincials” he alternated lyrical recollection in chapters like “Growing Up in the Family Store” with topics like “Anti-Semitism in the South.” Threading his personal story through discussions of the founding of Israel, the Civil Rights Movement, and Jewish-Christian relations, he made the formerly peripheral study – Jews in the Dixie diaspora – central to the American experience.

“Jews were not aliens in the Promised Land,” he wrote, “but a blood-and-bones part of the South.”

That mingled identity drove his literary quest: “I am not certain what it means to be both a Jew and a Southerner – to have inherited the Jewish longing for a homeland while being raised with the Southerner’s sense of home.”

That quest played out in later books.

His 1988 biography, “Judah P. Benjamin: The Jewish Confederate,” explored the dramatic life of the Secretary of State to Confederate President Jefferson Davis, “the Confederate Kissinger,” as Evans called him. Historian C. Vann Woodward praised the book as “spellbinding.”

His 1993 collection, “The Lonely Days Were Sundays,” took its title from the diary of his maternal grandmother, Jennie Bloom Nachamson, born in Lithuania, parent with Eli Nachamson to eight daughters and one son, North Carolinians all.

A painting of Jennie and her children – Evans’ mother Sara the eldest – was the cover art for a 2005 reprint the “The Provincials.”

“His dedication to community made his literary accomplishments all the more remarkable,” said writer Roy Hoffman, whose interview with Evans is in the Eli N. Evans papers at UNC Libraries. “Eli found a dynamic balance between a writer’s interior life and a public servant’s call to action.”

In Manhattan he found a Southern Jewish bride. Judith London, raised in an Orthodox Jewish home in Montgomery, Al., worked in New York as an officer with the financial institution TIAA-CREF. On Nov. 15, 1981 the couple were married at the St. Regis and settled into an apartment off Gramercy Park. The Brotherhood Synagogue, a block away, became the center of their religious life.

When their son was born at NYU hospital, Evans took a vial of dirt from North Carolina into the delivery room, as he described in the essay, “Home”:

“With one hand I held Judith’s hand, and with the other clutched the southern soil … I wanted him to know his roots and I believe that one had to create family legends early. So whenever I reported to my mother that Joshua wanted his shoes off or was diving into some grits, Judith said on the other line, ‘the dirt’s working!’”

Joshua Evans, a New York-based SAG-AFTRA actor and voice-over artist, said of his father’s legacy: “It took me a long time to realize that my father’s superpower was his warmth and charm. My dad could, and would, talk to anyone – and by the end of that conversation, you felt as if you were the only two people on earth. His gregarious personality always embarrassed me as a child. However, as I have grown older, I have come to recognize a small hint of this trait in myself and I could not be more proud to carry that part of him with me forever.”

Eloquent and sociable, in recent years Evans remained a captivating speaker at synagogues and book festivals, with honorary doctorates from Union Theological Seminary, Hebrew Union College, and UNC-Chapel Hill, where he helped create the Carolina Center for Jewish Studies.

“The sages tell us,” Evans wrote, “that every man should have a child, write a book, and plant a tree.”

It was “beshert,” he would say in one of his favorite expressions, Hebrew for destiny, that he was blessed to fulfill them all.

One final note – Eli’s son Joshua would like to thank the staff at 305 West End Assisted Living for the care they provided Eli starting in 2019. Their love and support helped both Eli and Joshua through the final years of Eli’s life.

To order memorial trees or send flowers to the family in memory of Eli Nachamson Evans, please visit our flower store.