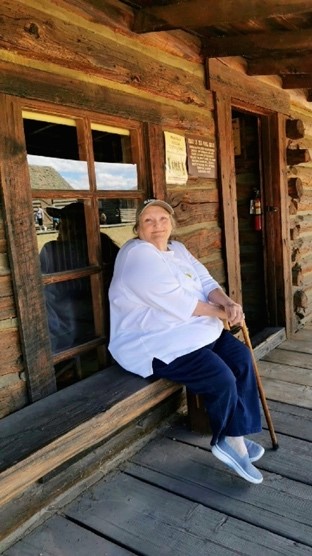 Edna was born and raised in Erwin, NC with her fondest memories including time spent with her grandfather on the Ryals family farm and tooling around town in flashy cars. She would graduate from Erwin High School before leaving her hometown in search of greater adventure.

Edna married twice but neither marriage took, so to speak, and she would raise her three children primarily on her own.  Her natural gift for gab and her ability to make everyone feel welcomed enabled her to find work during these years as a bartender.

After having followed her first husband to Texas and living there for over 10 years, Edna returned to North Carolina, and settled in Durham where she would live out the rest of her life.

Edna was a self-learner and she instilled within her children a curiosity about the world, an ability to think for themselves and a willingness to take life’s challenges head-on. Despite having what she described as “terrible taste in men,” she learned to live for herself and to value her independence more than anything else.  And though she could not afford to travel as much as she would have liked, she visited new lands and met new people through a lifetime of voracious reading.

Through it all, Edna kept her sharp intellect, her beautiful smile, and her quick wit.  She was strong-willed and soft-hearted.  She was fair-minded, valued candor, and insisted upon taking people as they are.  She was loyal to her friends and generous even when she herself had very little. Throughout her life, she had an affinity for the outlaws, the outcasts, and the ones simply down on their luck.

Edna liked to play gin rummy and scrabble, garden, get pedicures, enjoy a good steak, and tell tall tales.  She loved nothing more than a good visit with friends and family, except for maybe a road trip, the longer the better.  Her life came full circle this past summer when she took a family road trip to South Dakota and Wyoming, retracing the route she had made with friends 35 years earlier.  Along the way, she invariably could be found on a bench somewhere, swapping stories with a person she’d just met and living in the moment.

She was preceded in death by her parents, her brother, Gene, and her sister, Faye.

At her request, there will be no formal funeral service for Edna.  Her cremation through Hudson Funeral Home and Cremation Services will be attended by immediate family.  Her ashes will be inurned at the Ryals family cemetery in Erwin and followed by a private memorial dinner

To plant a tree in memory of Edna Gray Burnsides Brosset, please visit our Tribute Store.

To order memorial trees or send flowers to the family in memory of Edna Gray Burnsides Brosset, please visit our flower store.