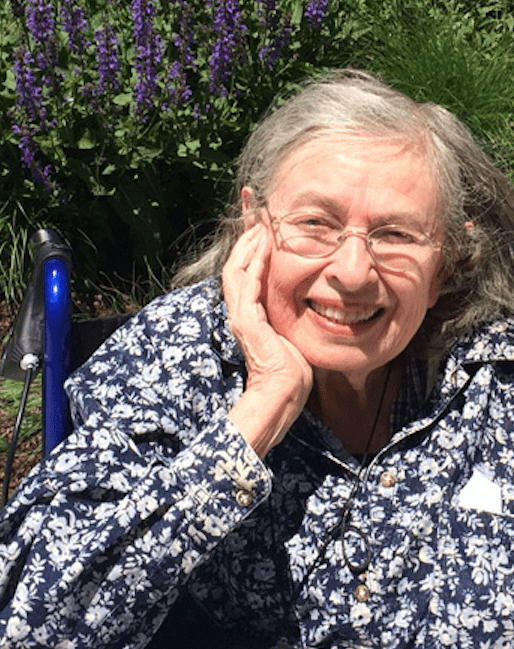 NEW YORK- Deborah Meisels Weinstein passed away peacefully on Monday, November 30, 2020. She was born on November 15, 1930 to Raphael and Zelda Meisels in New York, NY. She graduated from Syracuse University. Debby with husband, Norman traveled regularly to North Carolina since 1982 to participate in their daughter Emily’s many art events.

A graveside service will be held at 1:00p.m. on Sunday, December 6, 2020 at Markham Memorial Gardens. Officiating will be Rabbi Robin Damsky.

Debby had just turned 90 and was living with her daughter Rachel since September 2019. At the time of her passing Debby’s two aides, Leisel and Sheryl and her daughter Rachel, were with her, letting her know she was safe and loved. Despite her brave battle with Parkinson’s Disease and other medical complications, her passing itself was peaceful. Hers was a soft landing.

We envision Debby reunited with her beloved husband, Norman, strolling the streets of Paris. Norman grinning as his ever-beautiful Debby approaches and she, grins back. Placed with her are several meaningful items including photographs of her granddaughters, Madeline and Amélie, a cat pillow which was a gift from Paris friend Rahma, and the hand-wrought wedding band that matched Normans, both crafted as they watched in the West Village. Debby’s friends were important to her and many. She made friends easily wherever she lived, and until the last few years of her life she was a conscientious correspondent, looking forward to both receiving and sharing written updates about family, travels and mutual friends.

Sharon, living around the corner from Debby on Manhattan’s Upper West Side, was Debby’s oldest friend; the girls’ mothers, Zelda and Molly had been close friends as young women. Mary Jones, from England became pen-pals with Debby when Debby was ten years old and Mary twelve. More recently Nina, Emily’s mother-in-law became a new and devoted friend. Then there were her old AAUW and League of Women Voters groups out on Long Island when she was raising her family and in Manhattan, her Ami Chai Hadassah study group. All to say, besides her devoted husband, her three children, and her sister Naomi, friends enriched Debby’s life.

Debby loved her African violets, her cats (Felix and Darcy and even the terror, CeCe), our dogs Mushroom, Kahotec and then Simba, her book clubs, poetry, keeping a journal, gardening, traveling, and the list goes on. She loved delivering meals to homebound elderly clients through Meals on Wheels in Roanoke, Virginia, a mission Norman fully embraced (he had no choice) as he drove Debby on her routes up icy mountain roads in winter months.

For a while Debby worked in a church basement, teaching young children with Down Syndrome and recruited Rachel and Emily on occasion to help out. For years Rachel’s posse of friends wrapped books at Barnes & Noble in December to raise money for Hadassah at mom’s request. Debby was mild-even, even-keeled, cheery and quietly persuasive as one could not question her noble intentions. She had a full, adventure-filled life and she was content.

Debby is being buried in Durham where she lived with her husband for their final adventure together. If anyone wishes to make a donation in Debbie’s memory, these are some of the nonprofits she supported in recent years: Hadassah, Independent Animal Rescue, Volunteers of America-Greater New York, Central Park Conservancy, Southern Poverty Law Center and WNYC Public Radio.

Rachel (NYC), Emily (Chapel Hill) and Jonathan (Czech Republic), thank each of you for playing an important role in their mother’s life, for contributing to her joy or just being an interesting fellow traveler!

To order memorial trees or send flowers to the family in memory of Deborah Weinstein, please visit our flower store.