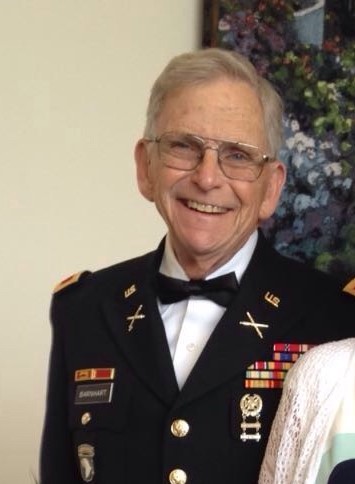 U.S. Army Colonel David Scott Barnhart passed into the arms of his Savior, the Lord Jesus, July 3, 2022, from complications of kidney failure. Born August 3, 1936, in Eugene, Oregon, Colonel Barnhart later graduated from Oregon State College and then entered the Army. He served his country proudly, both active duty and reserve for 40 years in his assignments in Maryland, New Mexico, Colorado, Hawaii, Pennsylvania, Texas and Oklahoma.  He also served two tours of duty in Vietnam where he was awarded two Bronze Stars for service in combat, as well as the Republic of Vietnam Gallantry Cross for his service with the South Vietnamese in actions against Viet Cong and North Vietnamese enemy forces.  It was in Vietnam where Colonel Barnhart heard the Gospel preached by Billy Graham and met his Savior.

Colonel Barnhart retired from the Army in 2000 and continued to serve in civilian government service, doing contract work for the Army in testing and evaluation of weapons systems, also earning two additional Master’s degrees along the way.  He was a music lover and sang in many choirs and groups, both secular and sacred.  He sang many solos in the churches where he was a member, also singing duets with his son David, and even occasional specials with his grandchildren, Alexandra Wetmore and Katarina Barnhart.  Colonel Barnhart served the Lord as choir member, deacon, adult Sunday school teacher, Sunday school superintendent, Harford Christian School board member, and was active in all services and led his family to do the same.

To order memorial trees or send flowers to the family in memory of David Scott Barnhart, please visit our flower store.