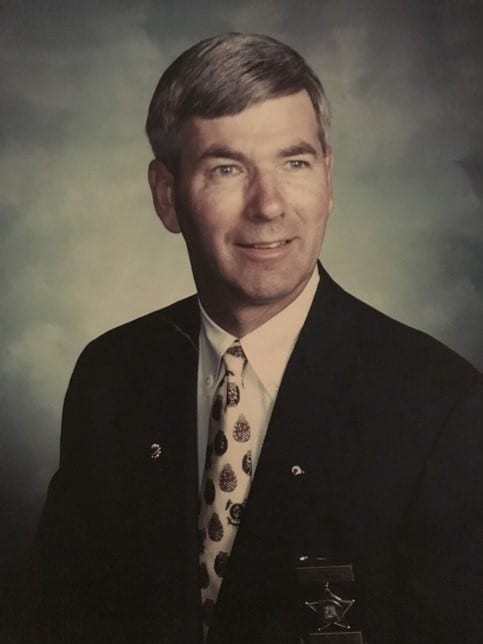 Arthur Wayne Bryant, 73, of Laurinburg, North Carolina, passed away on October 8, 2019 after a hard-fought battle with cancer. His family fought along with him throughout the duration and were by his side until the very end.
Wayne was born May 1, 1946, in Tarboro, NC, to James Willie and Juanita Bryant and was one of six children. He briefly attended Chowan College before being drafted into the U.S. Army and sent to Alaska. Upon completion of his assignment, he moved to Burlington, NC, where he began his career in public service, first as a fireman and the next 8 years as a state trooper. When a work-related incident led him to Rex Hospital one fateful night, he met a nurse, Ginger, who would soon become his wife of forty years. They married in 1979 and lived in Cary for a brief period before moving to Laurinburg so that Wayne could work for his brother-in-law, Harry Covington, at Covington Redi-Mix. It was during this time that Wayne was
encouraged by people in the community to run for sheriff given his passion for serving others.
Wayne successfully won his first of four terms in 1986 and served the public until his retirement in 2001. He was extremely proud of the work accomplished by the sheriff’s department during his tenure and often reminisced about the memories he made and people he met along the way. During retirement, he remained involved with the community while working at Scotia Village Retirement Community and Live Oak Estates Apartments where he made more everlasting friendships.
Although his career in law enforcement was an integral part of who he was, he was better known to his family as a devoted husband and loving father. His children, Ashley (Clay) and Jay, were his pride and joy and learned the importance of “family before everything” that he taught and modeled. This life lesson will be extended to his first grandson, Rex, that joined Team Bryant this past April. He also leaves behind his beloved pets, Jody and Bailey; siblings, Billie Bryan, JW Bryant (Debo), Phillip Bryant (Blanche), and Wesley Bryant; and a host of nieces, nephews, and in-laws. He is predeceased by his parents; brother, Eddie Bryant; nephew, John Wesley Bryant; and beloved mother-in-law, Ginny Covington.
Wayne had fond memories from his membership in many civic organizations, golfing days at Scotch Meadows Country Club, serving as the Athletic Director of American Legion Post 50, mornings spent with the Captain Larry’s Coffee Club, Friday nights watching Scotland High Football, quiet moments in a deer stand, and boating and fishing days at Ocean Isle Beach. While his family is mourning a great loss, they have been surrounded with love and support from the community and relish in the certitude that his memory will live on through his legacy to “protect and serve”.
The family welcomes everyone that knew and loved him to a Celebration of Life on Sunday, October 20, 2019, at 5 p.m. at Scotch Meadows Country Club in Laurinburg, NC. As an expression of sympathy, memorial contributions may be sent to Hospice of Scotland County, Scotland County Humane Society, or the Wounded Warriors Project.

To order memorial trees or send flowers to the family in memory of Arthur Wayne Bryant, please visit our flower store.